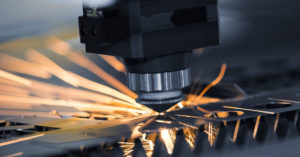 Repairing a mould is less costly than replacing it, but there are issues you need to consider. Will the repaired mould produce parts to the same level of quality as when it was new, for example, and how long will the repair last?

These questions and considerations are important to all industries, but they are brought into even sharper focus in industries like the MedTech sector where repeatable quality and precision are so important.

How can you repair moulds while minimising the impact on product quality? Is there a cost-effective approach?

The answer is to use laser welding.

Gerry Rafter is a Director of Tool & Gauge, a mould manufacturing and precision machining company with decades of experience in the industry. It has extensive experience in the MedTech sector and offers mould design, manufacture, and repair services, in addition to other specialist services.

What is Laser Welding?

Laser welding is an alternative method of welding. It is not as widely used as TIG or MIG welding, but it does offer very significant benefits in certain situations, such as repairing moulds.

Laser welding is a process that joins together metals or thermoplastics with a laser beam. The laser beam is a highly concentrated heat source.

In other words, it is very precise, with the operator having a high level of control as to the laser beam’s location and direction. The operator can also tightly control the pulsing of the beam which, in turn, controls the amount of energy used to create the weld. With an experienced welder as the operator, substantially less heat is required to create the weld than with alternative forms of welding, such as TIG welding.

In addition, controlling the pulse of the beam allows the welded area to cool down more rapidly.

There will still be some softening of the base material with laser welding, but it is substantially less than with TIG welding. The area affected by softening, known as the heat-affected zone, is also smaller due to the precise nature of the laser beam.

As you can see, laser welding delivers considerable advantages when repairing moulds. In summary, the main risk with other forms of welding is that the process will damage the base material of the mould in the heat-affected zone. This alters the mould and can affect the parts it then goes onto to produce.

For the reasons mentioned above, laser welding doesn’t cause anything close to the same level of damage to the mould’s base material that TIG welding can cause. This ensures you can continue using the mould in a high-volume, high-precision production environment.

As mentioned above, the expertise of the operator is crucial to repairing a mould to as high a standard as possible. With the right operator, though, repairing moulds using laser welding will give you a mould that is as close to new as you will get.